Bat Girl And Myself

Have you tried the ReFace app? You gotta try it, what fun.  I got a giggle when I discovered my favourite gothic Edwardian photo was offered . I snapped it up immediately. I don't know how long it will be on the app? They changed them constantly.

This photograph was taken by Adele K.u.K Hof Atelier in the 1900's. It depicts a young girl in a bat costume with two bats on her outfit, one perched on her head like a fascinator and the other sewn to her chest to resemble a collar, very goth. This is the Austrian actress Maria Schleinzer. Google her, very interesting story. On the internet you can find additional photos of this photo shoot, she was such a cute gal.

Here is my version done with a Reface app on Google Play.  I have months to think about my Halloween costume, but this is definitely a goal.  I've seen gals posting photos of themselves in this costume, what a great idea. I'll check with Etsy first, you just never know what you'll find.

No bat was harmed, it's a faux bat. 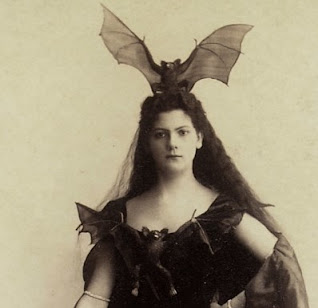 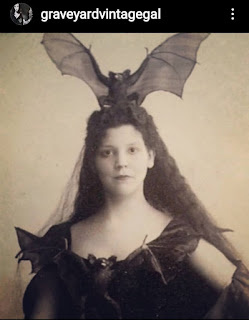 To Dress Vintage on Ecrater

jane
Seattle, Wa
For the love of vintage!!! Here's where you can find To Dress Vintage and the Only Couture collection combined. My other blog is at onlycouture.wordpress.com ,so feel free to email me anytime. cabbiekat@hotmail.com or leave a message on my comments.